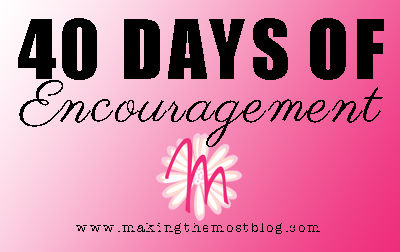 Okay, so I know I’m a bit behind on the times when to comes to posting about what I’m giving up for Lent.  In fact, I was a bit behind in figuring out what I wanted to give up for Lent to begin with.

I’ve only begun celebrating Lent within the last 10 years.  I didn’t even really understand its significance until I joined the United Methodist church.  And I don’t think the giving up part is anything you HAVE to do to be a Christian–I just do it, because it helps me draw closer to Christ, helps me understand what He went through during His 40 days of temptation, and to focus on the important things before Easter.

In the past, I’ve given up secular music, chocolate, and soda.  But I just could not figure out what to give up this year.  Food and drinks didn’t really seem to fit.

It wasn’t until this morning when I read this post by Karen Ehman that I decided I wasn’t giving up something for Lent–that I would add something instead.

I had considered doing what Karen Ehman had done, sending a note out to someone each day, but I’ve tried that before and just end up a little bit forgetful.  Instead, I decided to encourage one person via social media each day.  Not only do they get the encouragement, but they also get it instantaneously and are able to receive that affirmation publicly.  (And I’m on social media every day, so it’s less likely I’ll forget!)

Even though Lent has already started, why don’t you try to encourage somebody today?  I’d to have others join me in this challenge!  Interested in participating?  Use #40daysofencouragement.  I’d love to see you what you have to share!