skip to Main Content
Yesterday, we celebrated Princess Anna’s birthday. Her birthday is actually in the summer, but having had a summer birthday, I know many people will be out of town for her birthday. Because of that reason, I wanted to make sure she had a successful birthday, so we just celebrated 6 months early. As a family, we will celebrate on her birthday, but her friends were able to celebrate with her this weekend.

Her newest favorite Disney character is Princess Anna. If you couldn’t tell.

Anyway, because her favorite character is Princess Anna, of course we had to have a Disney Frozen birthday. With the movie just having come out this winter, it was tough to find everything I was looking for. In fact, when I went to Party City on Thursday, they didn’t even have the Frozen products out yet; they had to get them out for me, and then I bought every plastic cup they had! I must say I was very fortunate for them to have them; I was cutting it pretty close.

Everything else I either created myself or found on Pinterest. Here’s what we came up with: 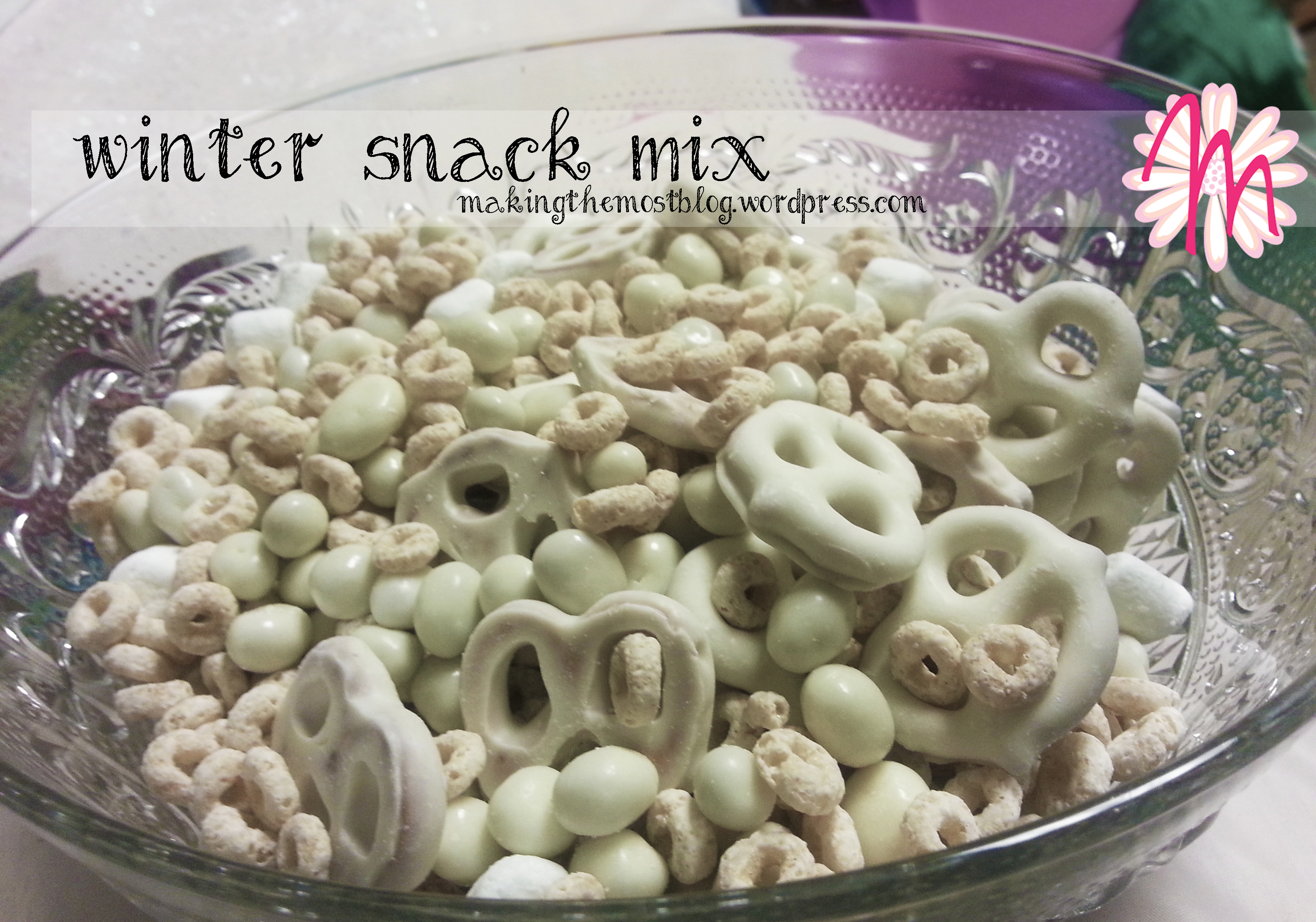 1) Winter Snack Mix: I got this recipe from Miss Janice. Unfortunately, I couldn’t find the cute snowflake-shaped pretzels as in her picture, but these worked out just fine.

Here’s what you need:

This is so easy too–just dump in however much of each ingredient you like, and you’re good to go! 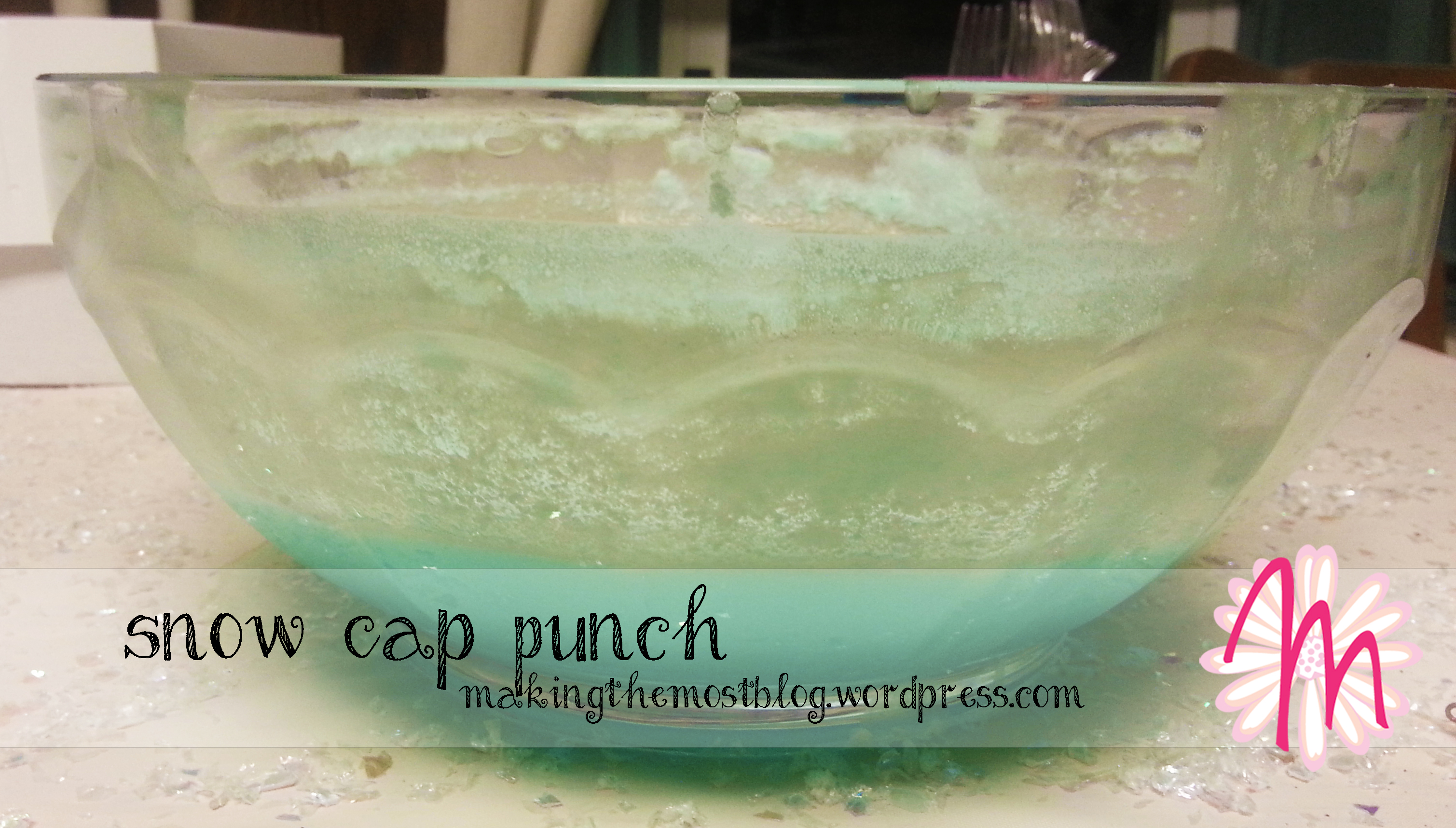 2) Snow Cap Punch – I got this recipe from Bubbly Nature. I didn’t make special cups, but the ice cream in this recipe makes a great wintry effect as it is.

Here’s what you need:

How to make it:

The directions on Bubbly Nature tell you to add the ice cream when serving the drinks, but to save time we added it to the punch bowl, which worked out well for us. 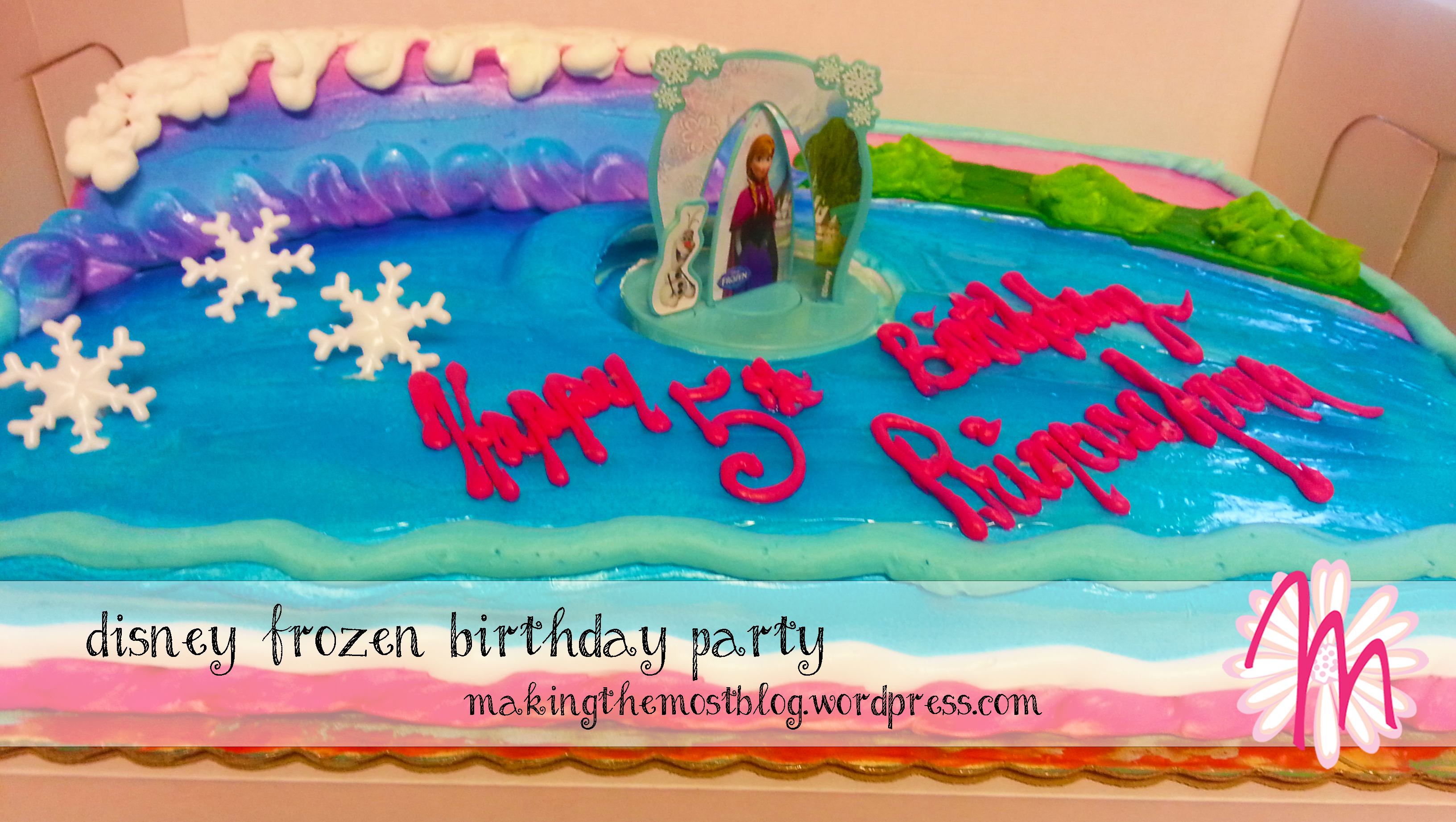 3) The Cake – I definitely don’t have the time or patience to create a cake on my own. My little princess loved this cake with the Disney Frozen kit, which you can order from your local grocery store (if they carry them) or Wal-Mart.

4) Decor: The decor and design was mostly my own. I used a roll of white tablecloth (we keep a roll at home for all of our parties), and I found some sparkly white confetti at Party City that worked out perfectly for a snow effect. I had hoped for snowflakes, but since it’s February it was slim pickin’s. The confetti worked out perfectly. I also found some colored snowflake ornaments at Wal-Mart on clearance for $0.10! Not to forget the many ‘glowing design‘ ideas on the Internet that go well as signage on the wall for such occasions. If I had shopped a little earlier, I might have found more snowflake items, but these were the perfect colors, so I was happy with what I had. I just cut off the string, and you could hardly tell they were ornaments. Here’s a better picture of the snowflakes and confetti: 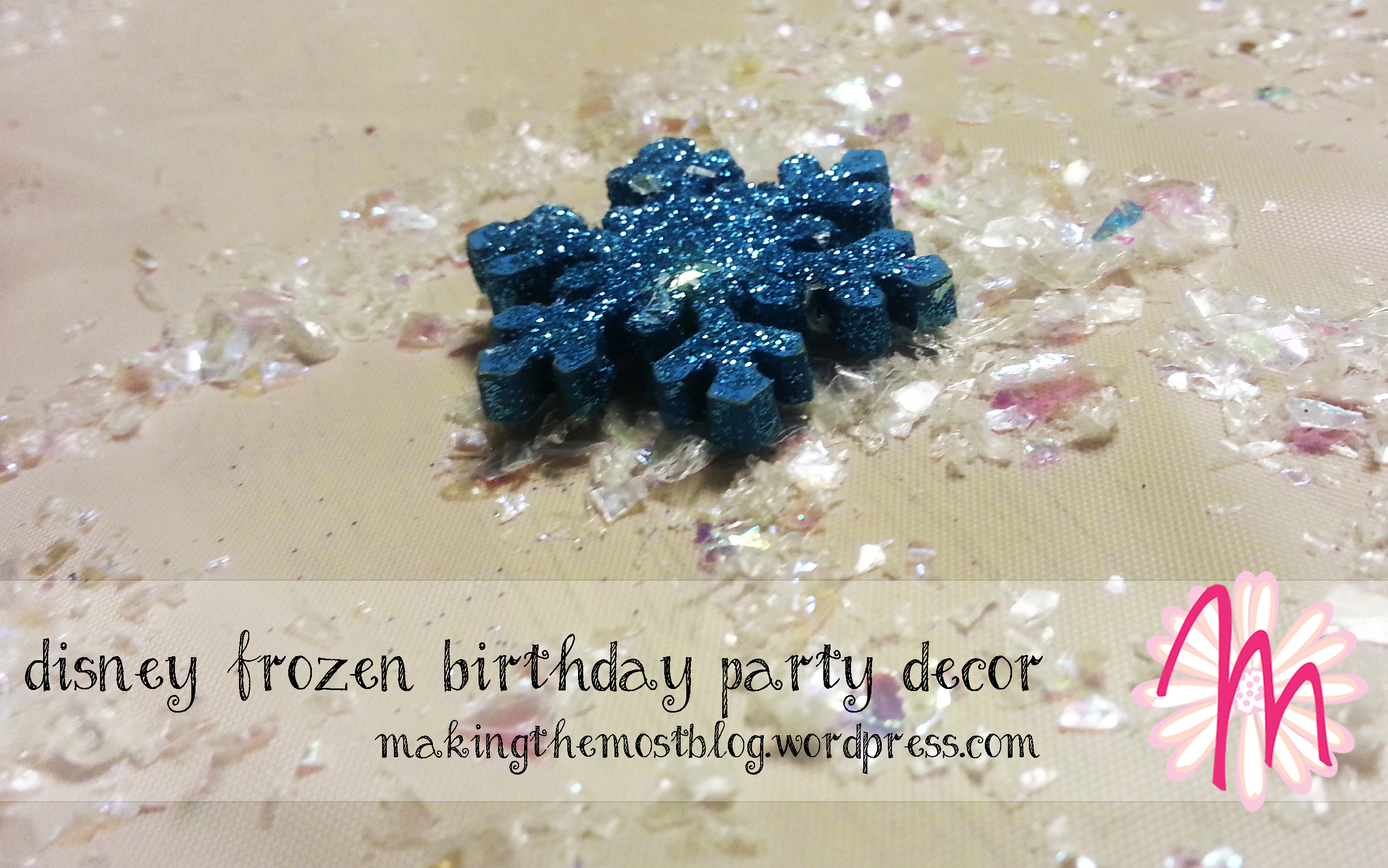 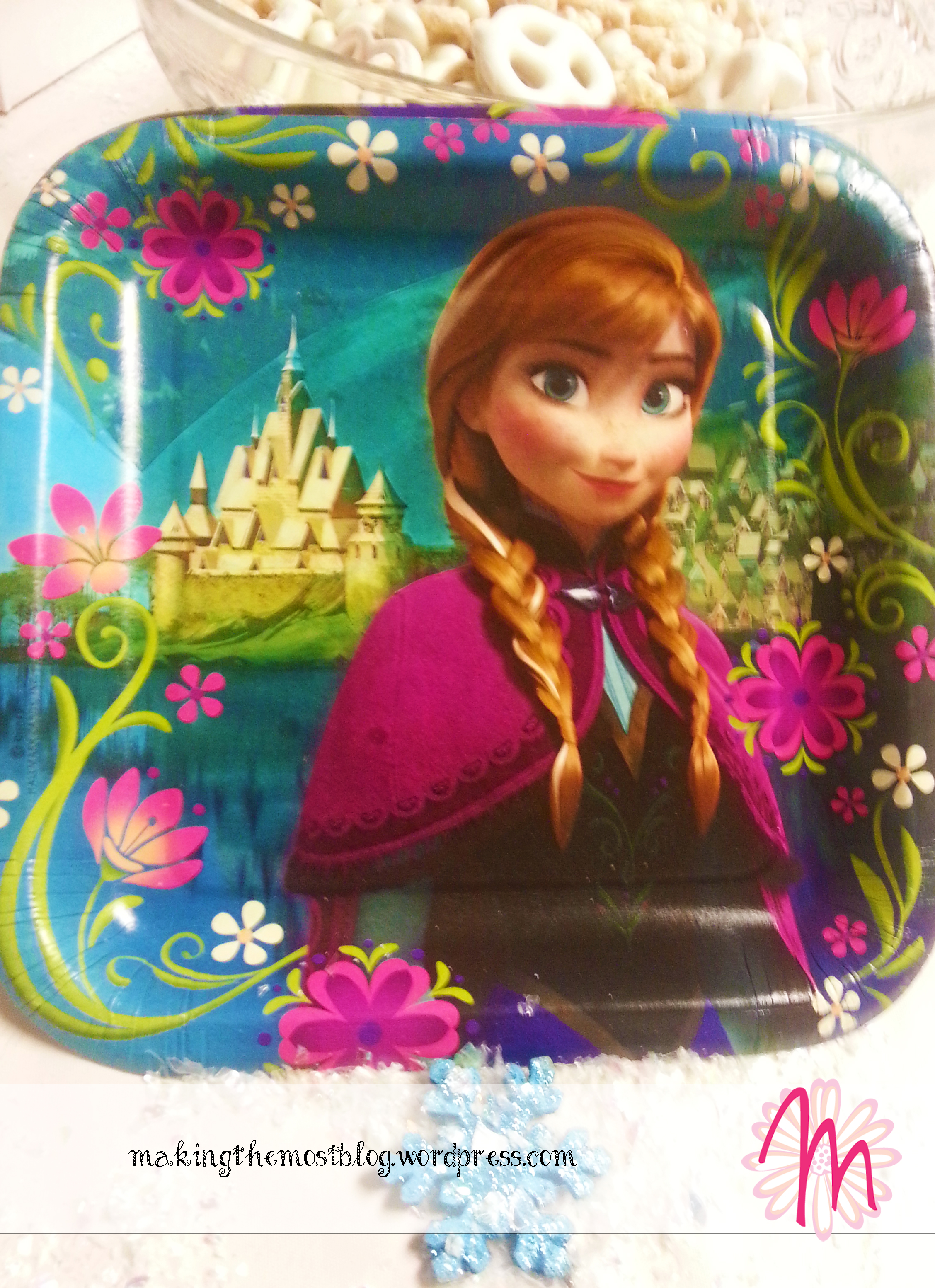 5) Paper Products: More props to Party City, which provided me with these dessert plates. If you’re providing more food, they also have lunch plates, but we kept it small and stuck with the dessert plates. There are also napkins, paper cups, and plenty of colored utensils. I personally liked the plain clear utensils (think ice). We also purchased a mall banner, which was a little small for us (a bunting might have been better), and they also had a Frozen tablecloth, but the white worked well for us. They had some great prices as well. I’d definitely check them out for paper products. 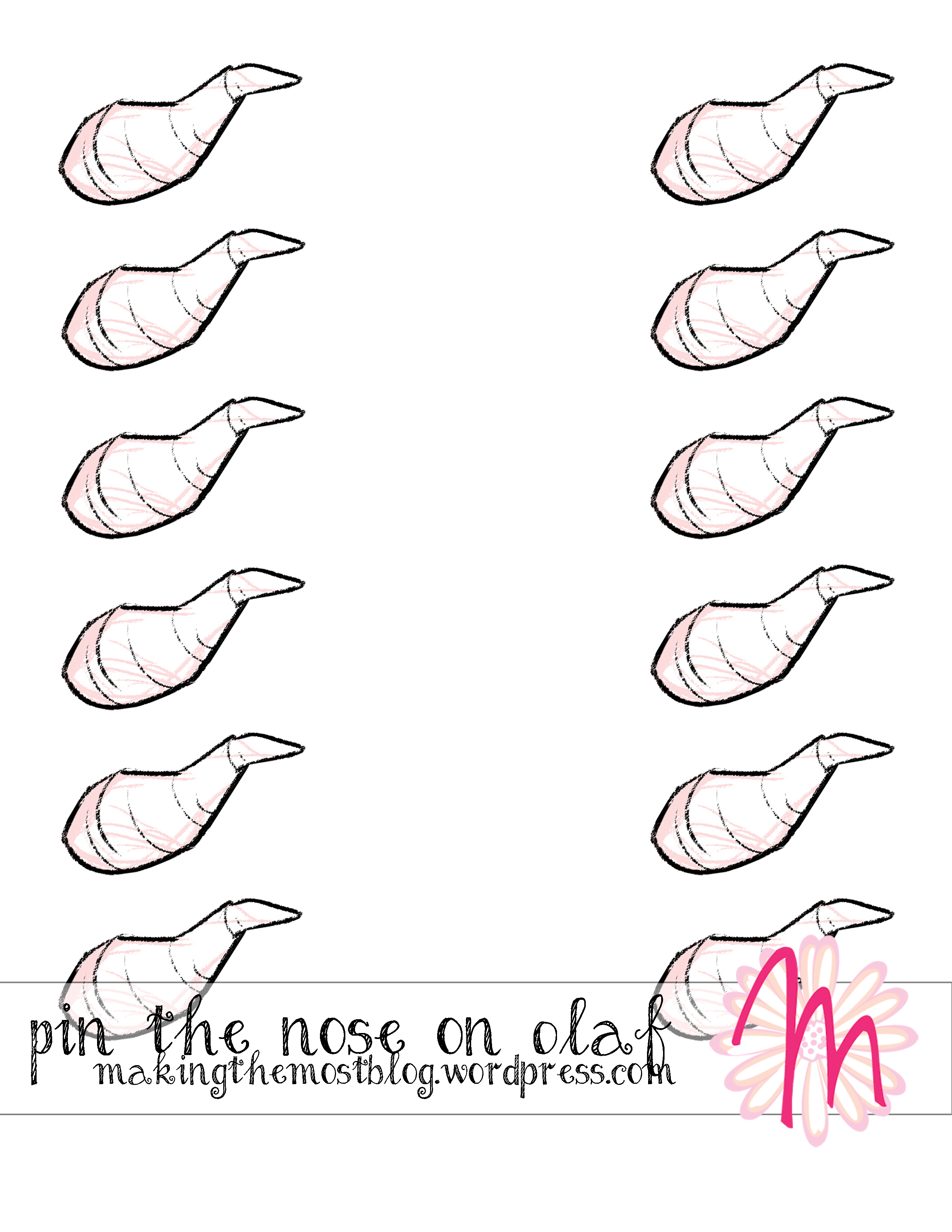 6) Games: We played one game at this party: Pin the Nose on Olaf – As soon as I saw the movie, I new exactly what I was going to do for this game. I found this Olaf image at Stitch Kingdom. I cut the noses off of one of the other Olaf images on the same page, copied, and pasted them so we would have one for each kid. It was just like “Pin the Tail on the Donkey”, the kids had great fun with this game. We also bought a bouncy house because, well, is it a kids birthday party without one? You can find the website we bought it off here. The children loved it and we literally had to drag them off it at the end of the party. 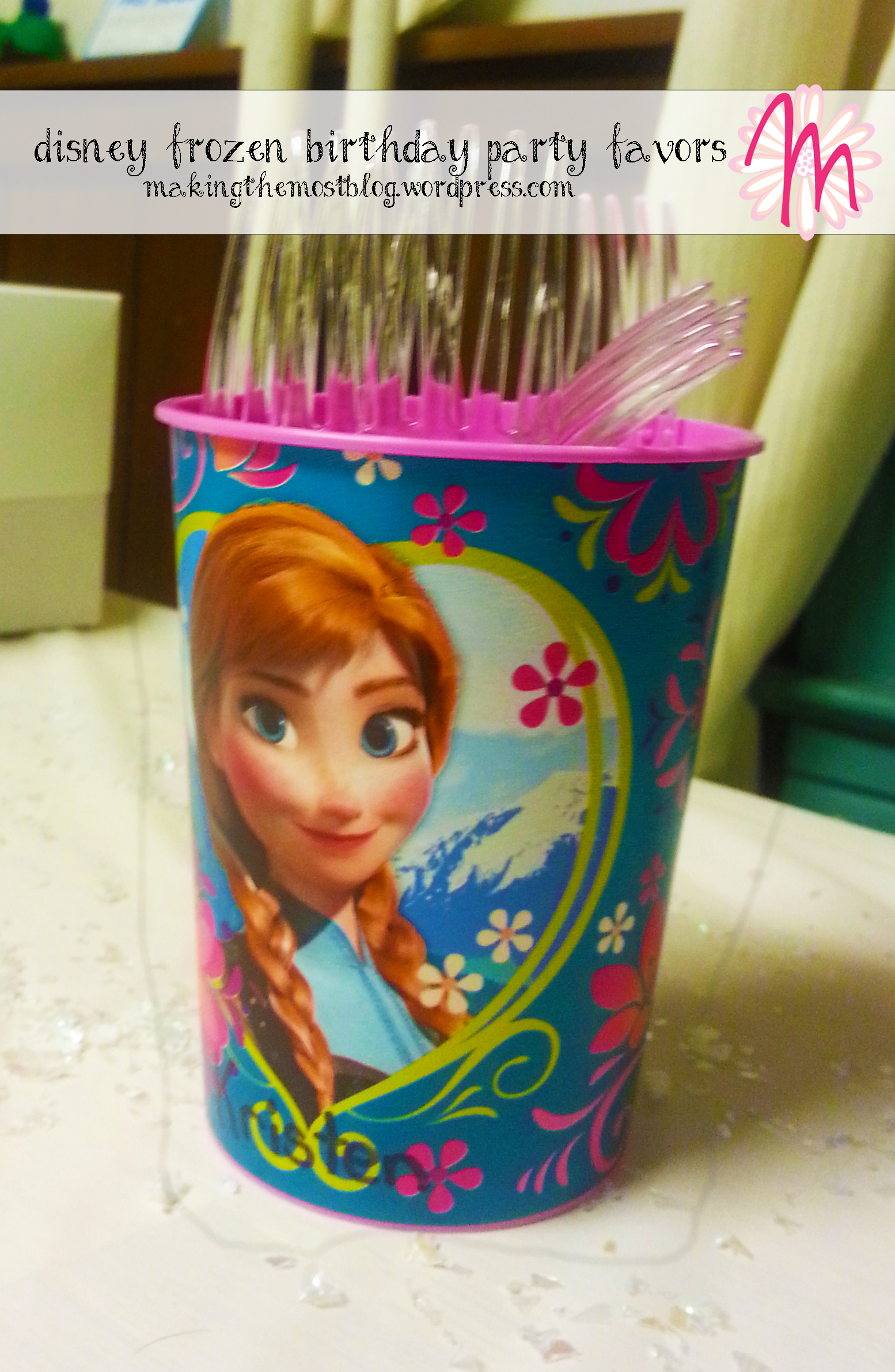 7) Party Favors: Party favors really depend on the person. I’m not really one who likes to spend a lot of money on favors, but I hate to send home favors that will just get thrown away. I really value gifts that will last a while (hence why my friend bought me something from WatchShopping for my birthday!!) I picked up these cups at…you guessed it…Party City. I purchased one for each girl that was coming and let the boys and adults use paper cups. Each girl took one of these cups home with them. I am also a huge fan of printables, and they are SO cheap! I printed off the following activities and sent them home with each child:

2) Build Olaf Craft – The instructions on this activity suggested allowing the child to keep the pieces separate and rearrange as desired. I had some brass fasteners lying around and decided to connect the body parts with the fasteners. I was thrilled with how this turned out! The kids could put together their snowman however they wanted, and I gave them the option to color him as well. When they were done, they could move his arms and legs as they wanted. I would suggest poking holes with a safety pin to allow the fasteners to poke through the paper easier. 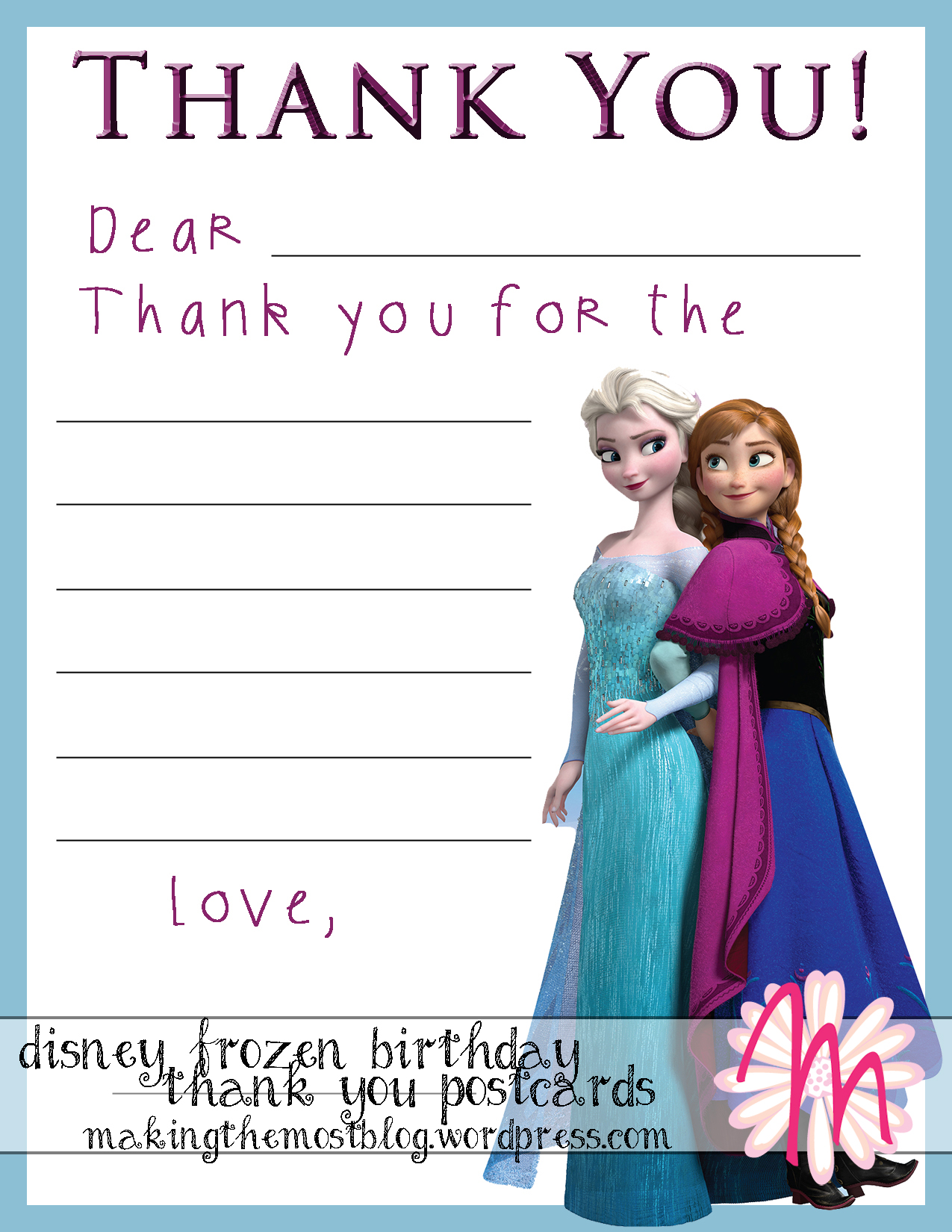 ?To follow up the birthday party, we are sending one more party favor, but that’s a secret for now. When I finish looking at doorhanger templates and putting those together, I’ll post that idea as well. Until then, I have one more idea for you. We’re working on sending thank you notes with the kids right now, so we kept notes of who gave what and will be sending thank you cards shortly. I couldn’t find anything I really liked online, so I made my own! Visit my etsy shop to purchase these thank you postcards as a digital download, or I will send a copy to the first three individuals who comment on this post!

Overall, I think this party turned out pretty well. What ideas do you have for your Disney Frozen party?