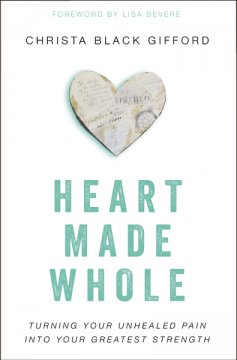 Have you ever picked up a book thinking it was going to be about a certain topic only to find out between the first and last chapters that you’d been deceived?  I just read a book like that; it’s called Heart Made Whole by Christa Black Gifford.

I’m currently conducting research for my next book, and the reviews were all fantastic, so I figured that Heart Made Whole would make a good addition to my library of research.  I read the first chapter expectantly and really liked the book.  I expected to give it rave reviews, but then it all went downhill.  First I realized that the majority of the book doesn’t really talk in depth about grief or the grieving process.  And then about halfway through the book, I just started getting irritated.  Here are a few reasons why:

Overall, Heart Made Whole is disorganized, Biblically all over the place, and a little strange.

I wish the author would have shared more about her experiences with loss, abuse, and eating disorders and how they related to her walk with Christ.  I’d have to say the best parts were the beginning, which was actually well written, and the end, which was also well written and brought the story to a good close.

If I had to make a recommendation, I’d say you might be better off not taking the time to read this one.  While I hate to say that about any book or author, my guess is that if you’re anything like me, you’ll not get anything out of it and actually look forward to the end of the book.  But then again, lots of people seem to like it, so this one’s on you.